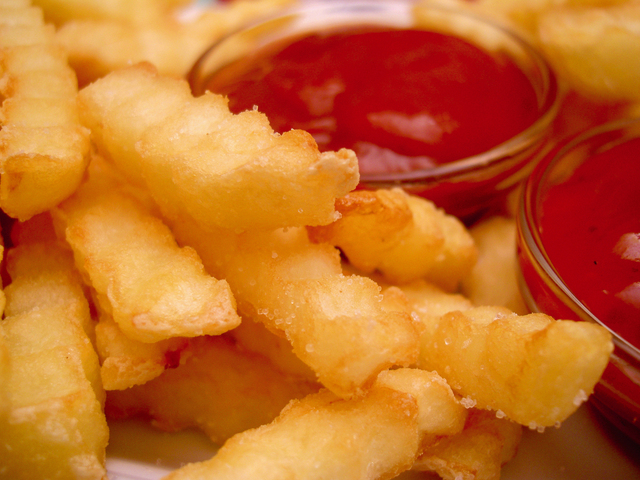 Chips- a great British tradition. Now if we were in Scotland, the question would be would you like salt and sauce with that? The answer is yes, because sauce is surprisingly good and actually I do miss that aspect of eating chips down south.
But more to the point, do you need chips? Well, after a long day when you cannot be bothered to cook and it’s a bit cold and nippy the answer may well be yes.
So when I am currently asking owners of dogs that come into the veterinary centre for their boosters who are unchipped, would you like a chip with that vaccination? Their answer should be yes. But sometimes they say no.
I asked myself why the negative response? Trying to get into anyone’s mind could be a difficult task but here’s what I came up with.

It’s going to hurt my dog.
True, I cannot deny that the needle is larger than one used for injections but the needle only stays in for a few seconds. We try to be as swift as we can. Animals do not appear to notice the chip after insertion, only the beep of the machine reading them. Which can be a surprise.

They move about don’t they?
It has been known for microchips to move a little, usually to one side of the shoulder to the other. However modern microchips have improved over their old counterparts and rarely move. They certainly to do not end up within the abdomen or heart as I have heard people say.

My dog is too young.
They rarely are too young, we have microchipped animals under 1kg in body weight. We make sure that they are correctly restrained and insert the microchip carefully and swiftly.

My dog is too old.
Age is no barrier to a microchip. If they are still alive by 6th April 2016, the UK government will not care how old they are, just that they have one. A bit like tax, they expect you to pay whatever age you are.

They already have a tattoo, why is that not enough?
Some dog’s including ex racing Greyhounds will have tattoos. I have even seen a German shepherd with one (An unreadable blue splodge but a tattoo none the less!).
There are several problems with using tattoos are a marker for identification, the skill of the “artist”, the lack of agreement in form of standardisation and not least the inability to access a database of these at any given time.
The microchips used in veterinary practice today, all comply with an ISO standard. So are easy to read with a standardised machine, and all come easy to register and look up by responsible organisations online at any given time of the day or night. Just what you need to reunite an animal with a worried owner on a Sunday afternoon.

I don’t want everyone knowing my contact details, Are they secure?
The databases are only accessible by individuals and organisations who have passed a security check. They are not released or sold on to other organisations.

Microchips are expensive
Well, we worked out at the current cost of the microchip and lifetime registration, over 12 years. The cost would be £0.0027 a day. It would be even less than this at primary vaccination or when undergoing another procedure under general anaesthetic. Less than one dose of wormers for a 25kg dog, less than a booster vaccination and less than one bag of chips with salt and sauce once a week for a year!